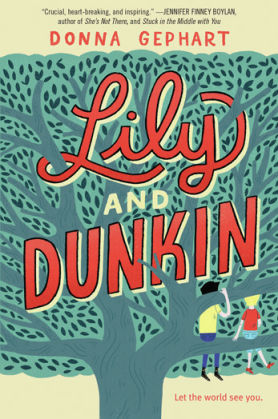 For an explanation of the sections of this review and for the full list of reviews of books with trans and non-binary characters, please read this post.

Lily Jo McGrother, born Timothy McGrother, is a girl. But being a girl is not so easy when you look like a boy. Especially when you’re in the eighth grade.

Dunkin Dorfman, birth name Norbert Dorfman, is dealing with bipolar disorder and has just moved from the New Jersey town he’s called home for the past thirteen years. This would be hard enough, but the fact that he is also hiding from a painful secret makes it even worse.

Representation of the trans experience – ★★★☆☆

There are moments when this book captures the trans experience. For example:

I blink a few times, praying the right words will come. True words. But what actually happens is the real part of me closes down. Walls spring up. Doors clang up. Mental alarms are set.

I hate this feeling.

Lily’s response to an opportunity to be honest about her gender. Page 44

In addition, the character’s concern with the changes she is experiencing as she goes through puberty – counting every new hair she finds on her chin, for example. However, over the course of the book there does seem to be a very strong sense of a cis viewpoint, viewing the experience through cis eyes.

This quote from the author’s note made me particularly uncomfortable:

In 2012, I attended Lunafest … with my friend and neighbour, Pam. One of the films was I Am a Girl!, written and directed by Susan Koenen. … [The main character] Joppe is a firl, born with male anatomy. … When the film ended, I looked over at Pam. Tears were streaming down her cheeks.

I knew I had to write about this.

Author’s description of ‘The Genesis of Lily’s Story’. Page 327

Most of the other characters in the book are supportive. Those that aren’t are criticised by the narrative. At the most basic level, the treatment of the trans character is good. However, there are more subtle ways in which Lily is not so well treated. For example, Lily’s sister Sarah and her best friend Dare are often expressing disapproval when Lily feels the need to give into society’s expectations, or when she is too afraid to take steps to come out. This is not challenged by the narrative at all – indeed, Lily often feels guilty as a result of this. I feel like this totally undersells how difficult it can be as a trans person to be open, how scary it can be, and the risk it can be (or feels like it can be). I feel like this plays into the somewhat cis-centric perspective I mentioned above. Not only that, but Dare at one point deliberately deadnames Lily because she doesn’t wear a skirt on the first day of school and outs Lily to someone else without her consent. This does not set a good example for cis allies and this is not made clear by the narrative.

Also, the first time Dunkin sees Lily, he reads her as female because she’s wearing a dress. Later, he sees her dressed in “boys’ clothes” and doesn’t recognise her, because he thinks this must be a boy. I struggle to believe that seeing someone he believes is a girl wearing jeans and a t-shirt is enough to lead him to no longer see this person as a girl, considering girls wear jeans and t-shirts and other “boys’ clothes” all the time. I suppose it could be argued that Dunkin was a long way away when he saw Lily in the dress. Lily does not come out to Dunkin until close to the end of the book, so chapters written from his PoV use her deadname and male pronouns most of the way through.

In addition, I’m not super keen on the way Lily’s chosen name is generally treated in the same way as Dunkin’s nickname. Trans people’s name are not nicknames. They’re their names.

The above may seem pretty negative, but overall I enjoyed the book. I read it all in one go and I liked the majority of the characters.

This is the age listed on the back of the book. However, if you’re planning to use this in your classroom, it’s worth being aware that the book features a character who stops taking anti-psychotic medication and suffers a severe psychotic episode that results in hospitalisation, as well as mention of a historical attempt at self-mutilation by a child. These are dealth with in a sensitive and age-appropriate way, but it will of course be necessary to take your children and your community into consideration.

2 thoughts on “Book Review: Lily and Dunkin by Donna Gephart”